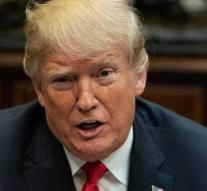 washington - The test of a new American warning system, a kind of NL-Alert, has been postponed. Americans would actually receive a text message from President Donald Trump next Thursday, but have to wait until October 3. The delay is related to the relief work around the tropical storm Florence, the authorities say.

The system is meant to quickly alert all Americans in the event of a disaster. The trial warning is called a Presidential Alert. Mobile providers from across the country had signed up for the trial. This means that almost all citizens receive the message. Unsubscribe is not possible.

The warning system is called Wireless Emergency Alerts. It was set up under the previous president, Barack Obama. The system can only be used in the event of a disaster or a terrorist attack.