Home / World / 'Trump's investment plan for US bogged down ' 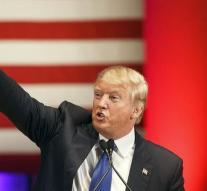 amsterdam - The Donald Trump investment will not be able to bring the promised growth in the US economy. Also his intention to create 25 million new US jobs encounters limits.

However, investments in US businesses and families certainly are 'very good' noticeable and the North American economy an edge over the eurozone.

'The recovery of the US is the weakest since the Second World War. It is difficult to see the problems that many further weaken this low growth. '

That concludes Anton Brender, Chief Economist of the asset Candriam. 'It's very, very unlikely that the plan is fully implemented,' says Bender.

The US economy is now growing for the eighth consecutive year, albeit by 1.5% yoy. A slowdown seems despite anticipated political hitches no question to be next year.

But the ambitious plans announced by the new president Donald Trump will not be fully realized.\n  \n  \n   advertisement

The US labor market first has virtually full employment. Around 25 million new jobs there, means that pensioners still have to work longer and that companies are dependent on immigration specialists.

'And we all know how Trump thinks about immigrants,' Brender refers to the wall that wants to pull the Republican between the US and Mexico.

Candriam the fund with € 100 billion in assets under management expects annual growth of around 3% for the US economy. The US government deficit, however, to double the investment.

The history then teaches that the tax reduction announced Trump, hardly provides returns for the US economy. 'The steady growth of 3.5% over ten years Trump promises, is almost certainly not be achieved,' he says. ' A comparison with the growth, employment and the budget deficit under Republican President Ronald Reagan picks for Trump's plans, what we now know, also from negative. '

Candriam is more moderate on the eurozone and especially France and Italy. 'Despite all the political instability has made the eurozone growth,' said Florence Pisani, head of economic research at the French company.

The UK economy will grow by 2% this year, although the approaching Brexit companies will reluctant to invest. 'However, the British economic growth in the coming period will weaken in all areas.'

Candriam has become more positive about the growth of the world economy, which slowed again in 2016. Emerging countries could go almost twice as strong growth in 2017 as the US and Europe.