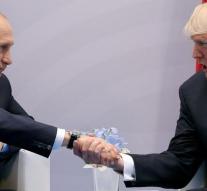 washington - President Donald Trump was not serious when he thanked his Russian colleague Vladimir Putin for the expulsion of hundreds of US diplomats. According to the spokeswoman of the White House Sarah Sanders, he referred to that 'sarcastic.' NBC News brought out its comments on Twitter to put an end to the confusion in the media.

Trump abandoned journalists to be pleased with Putin's measure, although he did not name his name specifically, because the US would save a lot of money. The Russian president decided in response to Washington's new sanctions that the US Embassy in Moscow has to cut 755 employees. There are also several Russians among them.