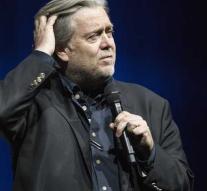 Bannon was one of Donald Trump's confidants during the presidential campaign and worked for the first months in the White House. But he fell into disgrace, was openly swollen, and was fired in August. Lately the controversial Bannon, among others, has popped up in Zurich to give a speech about the future of internationally popular nationalism. The German anti-immigration party Alternative für Deutschland (AfD) also asked him for advice on setting up his own news channel.

For a long time Bannon led the popular news website Breitbart in the US until he left there in January.