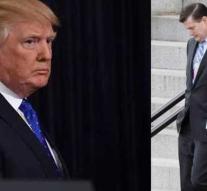 washington - A confidant from US President Donald Trump on Wednesday offered his resignation after a revelation in The Daily Mail. The British magazine wrote on his site that Rob Porter, who works as a secretary in the staff of the White House, has emotionally and physically abused two former women. He denies those allegations but finds it wiser to step out.

Porter's second wife Jennifer Willoughby says in the interview with the tabloid that her former husband struggled to control herself and once dragged her away from the shower and fought her. After their divorce, she asked for a restraining order after Porter had looked up to the appointments in her and had put the glass in the front door.

Colbie Holderness, with whom Porter first married, said he treated her 'verbally, emotionally and physically rough.' She was beaten during a holiday in Italy, so she walked around in Florence with a black eye. Holderness provided a photo as proof.

According to the boulevard press, Porter (40) recently started a relationship with his colleague Hope Hicks, head of information for the White House.