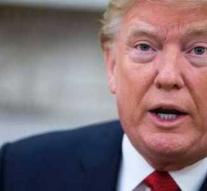 washington - US President Donald Trump voiced his concern in a telephone conversation with his Turkish counterpart Recep Tayyip Erdogan on Turkey's military operation in the Syrian Afrin region. There the Turkish army started an offensive against US-backed Syrian Kurds from the YPG.

Erdogan reiterated Wednesday that the operation will be extended to the city of Manbij. There is a risk that the Turkish troops will encounter American soldiers who help the Kurds in their fight against Islamic State.

Trump urged Erdogan to avoid actions that pose a risk of a confrontation between soldiers from both countries. The US President expressed concern at the growing violence in Afrin and called on Turkey to reduce its military activities and prevent civilian casualties in Syria.