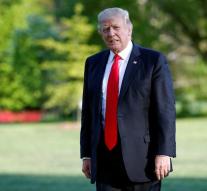 madison - The US president Donald Trump said Tuesday that ' always have to worry about a possible nuclear war with North Korea. 'The Republican response to a question from a reporter from WTMJ in Wisconsin, an affiliated station CNN. ' We have wait and see what happens, but it's a very difficult situation, 'said Trump.

The reporter should be concerned asked Americans about a possible nuclear war with North Korea. Trump said that you should always be concerned and not like previous US presidents keep you aloof from North Korea.