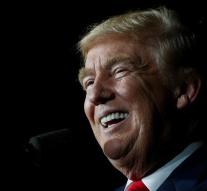 - Donald Trump has gone wrong with his emails. Claiming the US Newsweek has done research on the companies Trump. It shows that destroyed many thousands of e-mails and paper documents.

Newsweek examined thousands of lawsuits in which the companies of the Republican presidential candidate were involved. This shows that companies did everything to impede lawsuits. So there would be systematically destroyed documents.

By stretching the long lawsuits, many opponents had to dig deep into their pockets or drop out prematurely. Since the early seventies, Trump would operate this way.

Trump himself has heavy criticized Hillary Clinton has deleted emails from their server when she was minister. These were personal emails. According to Trump, however, the Democratic presidential candidate committed a crime and should be prosecuted for this.

In July, Clinton was still acquitted of using her private email address on state affairs. Friday reopened the case because on the phone of former Congressman Anthony Weiner and his ex-wife's new emails have been found which can be linked to Clinton.