Home / World / Trump will appeal to Putin about elections 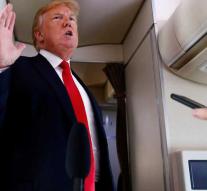 washington - US President Donald Trump said he will discuss Russian interference with the US election at the summit with his Russian counterpart Vladimir Putin next month.

He told reporters who flew with him in the presidential plane that was en route to New Jersey.

At the summit in Helsinki, Trump and Putin also talk about the situation in Syria and Ukraine, the president said.

Trump speaks this weekend with two candidates for the vacant post in the US Supreme Court. This week, Anthony Kennedy (81) announced that he will step down as a member of the highest court on 31 July. The president wants to announce his candidate on 9 June. That appointment must then be ratified by the Senate.

On the possible American increase in the import tariffs for European cars, the president said that his government is now investigating this and that a decision will be made on this within three to four weeks.