Home / World / Trump: war in North Korea is to be avoided 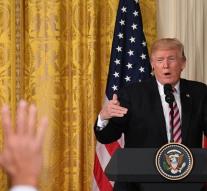 washington - Military action to remove the nuclear threat from North Korea remains an option, but it is not inevitable. That said US President Donald Trump on Thursday.

'Military action would definitely be an option,' said Trump at a press conference. 'Is it inevitable? Nothing is inevitable. '

'I would prefer not to walk the military road,' said Trump. The American Armed Forces is the strongest in the world and features 'beautiful' weapons. 'If we ever bet against North Korea, it will be a sad day for North Korea. '

The US president pointed out that 25 years of speaking North Korea did not stop nuclear weapons. 'North Korea behaves badly and has to stop it. '

North Korea tested last Sunday a hydrogen bomb, which could be placed on a long-range racket. The nuclear test, North Korea's sixth and the heaviest to date, was in violation of UN Security Council resolutions.