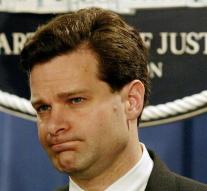 washington - The US president will push forward Christopher Wray as director of the federal detective FBI. He announced that Wednesday through Twitter. Wray becomes the sequel to the fired James Comey.

Wray was previously mentioned as one of the candidates. The lawyer previously had a high position at the Ministry of Justice and is currently employed by a law firm.

Comey will make a statement on the FBI investigation into alleged Russian interference in the US presidential elections in December on Thursday for a special Senate commission.