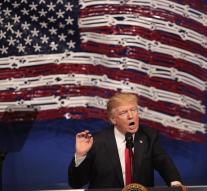 kenosha - US President Donald Trump announced on Tuesday a measure to end the abuse of visa policy for highly qualified foreigners who temporarily work in the United States.

'Now, H-1B visas be assigned in a completely random lottery, and that is wrong. Instead, they would only have to go to the most skilled and highest paid applicants and then absolutely never replace Americans, 'said Trump during a visit to a tool factory in Kenosha, Wisconsin.