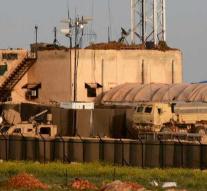 washington - US President Donald Trump wants to make a decision in the short term about the US military presence in Syria. The president made it clear that he is seriously considering reclaiming US troops. 'I want to go away. I want to take our men home. I want to start building our country. \u0026 # X27; \u0026 # x27;

The US has so far known about 2,000 troops stationed in Syria. Among other things, they provide support to local partners who fight Islamic State. IS formerly controlled a large 'caliphate' in Iraq and Syria, but there is little left of it.

Trump said at a press conference with Baltic leaders that the terrorist organization has almost been defeated. The president stated that disabling IS was the 'most important mission' of his country. ' We have almost accomplished this task and we will take a decision very soon, which will be coordinated with others, about what we are going to do. ''

The president stated that his country has spent trillions since 2001 on the Middle East. 'It does not give us anything, nothing at all,' Trump said. 'Remember: $ 7 trillion over a 17-year period. And it brought us nothing, nothing except death and destruction. That's horrible. So it's time. ''