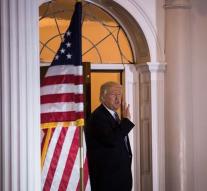 - The upcoming US presidential Donald Trump is open to a restoration of the relationship between the United States and Russia. That said Russian President Vladimir Putin Sunday at a press conference in Lima.

' The upcoming president confirmed that he is willing to normalize relations between Russia and the US, '' said Putin. ' I said the same to him. We have not discussed when and where we meet. ''

Putin also had warm words for departing President Barack Obama, who also visited the Peruvian capital for a summit of the Asia-Pacific Economic Community (APEC). According to the Russian leader has his US counterpart thanks for the many years of cooperation. Putin invited Obama to visit Russia.

The US and Russia in recent years were a number of times diametrically opposed. Thus, both the Americans and the EU came up with sanctions against Moscow after the annexation of the Crimea at the expense of Ukraine.