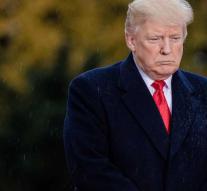 washington - Donald Trump has called for to stop recounting the votes cast in Florida for the Senate and a new governor. The American president posted via Twitter of irregularities at the ballot box. He thinks that the Senate seat should go to Rick Scott and that Ron DeSantis should become the new governor of Florida. Scott and DeSantis, like Trump, are members of the Republican party.

Florida decided last weekend to recount the votes cast in the midterm elections because the differences between the candidates had become very small. Scott had seen his lead on the incumbent Democratic Senator Bill Nelson drop to around 12,500 votes, or 0.15 percent. In the race for governorship, DeSantis's lead over his Democratic opponent Andrew Gillum had dropped to about 33,700 votes, or 0.41 percent.