Home / World / Trump wants to continue a ban on entry 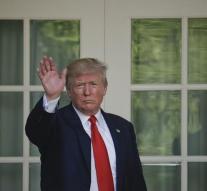 washington - US President Donald Trump has asked the US Supreme Court to lift the blockade on the entry ban that he wants to impose on travelers from Islamic countries.

When it comes to Trump, people with a passport from Yemen, Sudan, Somalia, Syria, Libya and Iran no longer enter the United States.

That decision was previously blocked by a federal court who believed that the President of Trump's decree seemed to be primarily intended to ward Muslims from the United States.