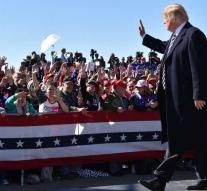 elko - US President Donald Trump wants to cancel the INF treaty with Russia. He said that during a meeting in Elko, Nevada. Security advisor John Bolton is in the process of ending the treaty.

In the INF Convention it has been agreed that all missiles that can fly more than 500 kilometers must be destroyed. It was signed in 1987 by Soviet leader Mikhail Gorbachev and the American president Ronald Reagan.

'Russia violates the treaty and it has been doing so for years,' Trump said. 'We are not going to allow them to violate the treaty, while we keep to the agreements. That is why we are withdrawing. '

Trump said that China is developing the same kind of weapons as Russia. 'China and Russia must come to us and say: let us be smart and all stop developing these weapons. 'China has not signed the INF convention.