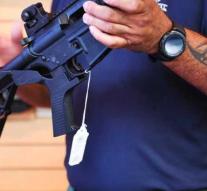 washington - US President Donald Trump wants to get rid of tools that are turning semi-automatic weapons into automatic firearms. He has drawn up legislation to ban such weapons accessories.

Trump instructed the Minister of Justice to come up with a proposal to 'ban all devices with which legal weapons can be used as machine guns'. The use of such tools is controversial. Stephen Paddock, who was massacred from his hotel room at a music festival in Las Vegas, had provided several guns with such 'bump stocks'.

The president is under pressure because of the bloody shooting at a school in Parkland to reduce the firearm violence in his country. The spokesperson for the White House did not rule out that more measures would follow. She said, for example, that 'has not yet been determined' whether an age limit should be set for people who want to buy semi-automatic firearms.