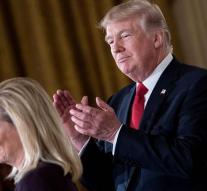 washington - According to the White House, US President Donald Trump presents his Iran strategy on Friday at 18.45 hrs. He then expects to tell if the Iranians keep his eyes on the nuclear deal by 2015.

Internationally, full thrills are being looked forward to the speech. The White House must report to Congress every ninety days whether Tehran meets the conditions. If Trump refuses to approve, parliamentarians must decide whether new penalties are imposed.

Allies of the United States called on Trump to hold on to the agreement, but it is unclear whether he will give ear to it. Trump called it under his predecessor Obama's closed nuclear agreement earlier 'the bad deal ever. '

Iran promised in 2015 after negotiations with world powers to build its own nuclear program in exchange for revoking international sanctions.