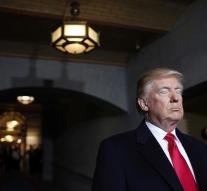 washington - The brand new president of the United States Donald Trump now let all speak out on social media. That while he no hour is officially president yet.

Through social media, he tells us: 'Today there was not only the transfer of power from one administration to another, or from one party to another- but the power is transferred from the power of Washington back to you, American people. #InaugurationDay 'Are Trumps first words as president.

He continues: 'What really counts is not what governs party, but whether our government is controlled by the people. January 20, 2017, will be remembered as the day the people were again the rulers of this nation. The forgotten men and women of our country will not be forgotten. From this moment, America leads the way.

He ends with a kind of message of hope. 'So for all Americans, in every city, near and far, big and small, from mountain to mountain, and from ocean to ocean, hear these words: You will never be ignored again!'