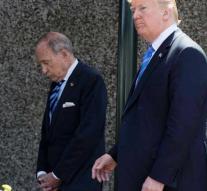 washington - Larry Kudlow, the White House's top economic adviser, has had a heart attack. That tweeted President Donald Trump from Singapore. He had just arrived there for his meeting with the North Korean leader Kim Jong-un.

Kudlow was chosen as a top advisor for the president of the United States in March. He replaced the previously resigned Gary Cohn. Seventy-year-old Kudlow is in the hospital and is doing well, according to a spokesperson for the White House. It was a mild heart attack, according to his doctors.

The advisor was present with Trump at the G7 summit in Canada last weekend.