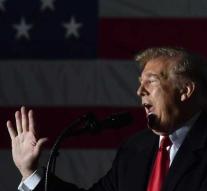 The shooting cost the lives of eleven people. Not everyone is waiting in Pittsburgh for the arrival of the president. A group of Jewish leaders asked him to stay away in an open letter until he completely rejected 'nationalist nationalism.' '