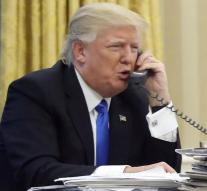 washington - US President Trump announced Thursday at 15:00 (21:00 Dutch time) in the White House's garden whether his country will withdraw from the climate treaty of Paris. That he himself puts in a tweet, which he closes with his famous motto, Make America Great Again! '.

American media reported Wednesday on the basis of anonymous sources that Trump wanted to abandon the agreement. During his campaign, Trump said several times that he did not believe in climate change. In January, he ordered the US Environment Agency (EPA) to get their climate change page offline.

Environmental organizations responded already to the news. And Jean-Claude Juncker, President of the European Commission, said it will take years for Americans to be under the terms of the agreement.

According to Juncker, Trump can think he can arrange the farewell with a pencil region, 'but that's because he does not know the details. It's up to Europe to say that's just not going to happen. ''