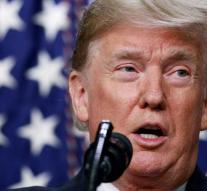 washington - US President Donald Trump has told thousands of falsehoods last year. According to the factories of The Washington Post, Trump used fifteen lies on average per day and...

The fact-counters counted more than 7,600 misleading or outright incorrect statements up to and including Sunday in the first two years of Trump's presidency. In the first year the counter stood at five inaccuracies per day.

According to observers, the growing number of lies and lies is explained by the fact that Trump is less attracted by his advisors and is becoming increasingly frustrated by the investigation into possible links between his campaign team and Russia.