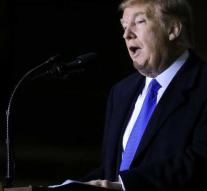 'We have just taken over the caliphate in Syria. You've always heard 90 percent, 92 percent, but now we have 100 percent, 'said Trump against soldiers on a base at Anchorage in Alaska. The Air Force One made a stopover there on the way back from Hanoi to refuel.

Earlier in the day, SDF commander Mazloum Kobani said in a video message that the 'total victory' on IS can be expected within a week.