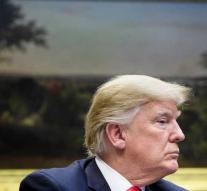 washington - President Trump has defended his decision to immediately withdraw the last US troops from Syria as a logical step. He argued via Twitter that he has been there for years...

According to Trump, the last extremists of Islamic State (IS) have enough enemies in the region; Russia, Turkey and Iran.

The Americans do not have to do the dirty work in the Middle East, according to Trump. Earlier he said that IS was completely defeated by the US.