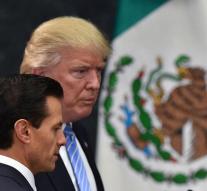 - Mexico and the United States have many common interests and are both on benefits to keep the hemisphere of which they are part safe and prosperous. That said, the Republican presidential candidate Donald Trump Wednesday in a joint press conference with Mexican President Enrique Peña Nieto.

The two spoke before the press conference an hour together. Trump showed himself remarkably conciliatory, especially considering his earlier descriptions of Mexico as a country that sends criminals and rapists to the US.,, It is a great honor that you have invited me here, '' said Trump against Peña Nieto.

According to Trump dividing the two countries five objectives: to end illegal immigration, secure the border, dismantling drug cartels and curbing trafficking in drugs, arms and adaptation of FTA and NAFTA preserving industry for the Western Hemisphere. One of his most controversial campaign promises- a wall on the border, paid by Mexico- Trump was suddenly a lot less certain: the subject came up, but who gets the bill will be determined later, said the controversial Republican.


Peña Nieto stressed in turn that the frontier in some cases detrimental to his country, particularly the flow of illegal weapons and money, which increases the power of the drug cartels.,, Your presence here, Mr. Trump shows that we share fundamental interests, '' said the Mexican president.,, Our countries are important to each other. The new US government can expect cooperation and a willingness to make the region safer. ''