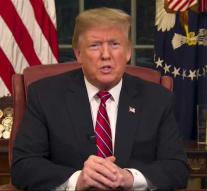 washington - The US President Donald Trump is expected to sign a temporary financing law for the government as an emergency solution for the current shutdown. That's what the news channels have...

As a result of a lingering political disagreement over the financing of a controversial border wall with Mexico, the American government has been silent for weeks now and wages are not being paid out.

The debate about the security of the border with Mexico, including the wall so desired by Trump, continues. But freeing up funds to pay short-term civil servants would 'remove stress from the system,' the spokesman said.