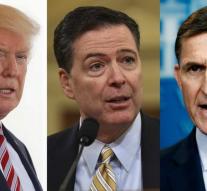 washington - US President Donald Trump has asked the fired FBI director James Comey to drop the investigation into former National Security Advisor Michael Flynn. That reported The New York Times on Tuesday, based on a Comey memo.

The FBI director wrote the memo just after visiting the White House in February, where Trump did his request according to Comey. 'I hope you can let this go,' Trump would have told him about the federal security advisory inquiry. The White House says in a first reaction that never happened.

The meeting had a day after Flynn had retired. In the memo, the former FBI director spends out the details of that conversation. The report was reviewed by two people who were close to Comey, who in turn informed The New York Times. The newspaper has never seen the memo or a copy of it.

Flynn had to resign after just one month, when he found out that he had misinformed vice president Mike Pence about his previous contacts with Russian officials after the presidential elections. In addition, Flynn failed to report that he paid a paid visit to Russia in 2015 and, inter alia, had a conversation with President Putin.