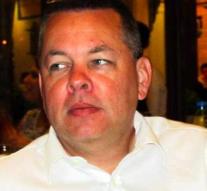 washington - President Donald Trump has expressed his support for the American preacher who is trapped in Turkey on suspicion of involvement in the coup attempt in 2016.

'Reverend Andrew Brunson, a good man and a Christian leader in the United States, stands without reason and is being persecuted in Turkey,' said Trump on Twitter. 'They call him a spy, but I'm more of a spy than he is, hopefully he can return to his beautiful family where he belongs! '

Brunson, originally from North Carolina, has lived in Turkey for more than twenty years. The authorities arrested him about a year and a half ago. The case has put the relationship between Washington and Ankara under further pressure. The court determined this week that it will remain in office until the next meeting on 7 May. The preacher can get up to 35 years in prison.