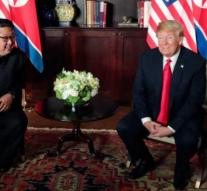 washington - US President Donald Trump has shared a short letter via Twitter from North Korean leader Kim Jong-un. The dictator thanks 'your excellency, Mr. President' for his 'energetic and exceptional efforts' to improve the relationship between the countries.

Kim looks back in the letter at his summit meeting with Trump in Singapore, which he describes as 'the beginning of a meaningful journey. 'Kim promised to commit to the' complete denuclearization of the Korean peninsula ', but the negotiations on the elaboration of this letter of intent are difficult.

North Korea earlier this month complained about the attitude of the US during follow-up discussions on denuclearization. The Americans got the reproach of 'gangster-like' demands on the table. Kim refers in his letter to a 'future process in which practical steps are taken', without going into details.

Trump seemed to be delighted with the message. 'A very nice letter from chairman Kim', he concluded. 'Great progress is being made. '

At the same time, the US is defending North Korea from violating the UN sanction that restricts the sale of oil to the country. The isolated country would try to illegally buy oil and sell coal through ships at sea.

According to the US, in the first five months of this year, North Korea transferred 89 times oil via ships at sea. At the end of last year, the UN Security Council set the supply of oil to North Korea at 500,000 barrels per year.

The accusation of the US of a violation of the sanctions comes at the moment Washington negotiates with North Korea denuclearization of the Asian country.