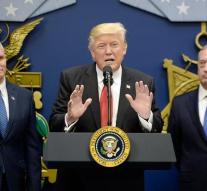 Deputy National Security Advisor Dina Powell is also on the journey, with meetings being held with leaders from Saudi Arabia, the United Arab Emirates, Qatar, Jordan, Egypt, Israel and the Palestinian Authority.

'While regional talks play an important role, peace between the Israelis and Palestinians can only be achieved through direct negotiations. The United States will work closely with the parties to make progress towards that goal, 'said the official.