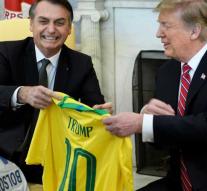 washington - Donald Trump sees Brazil as a potential member of NATO. The American president said that at the reception in Washington of his Brazilian counterpart Jair Bolsonaro.

Trump said the US has never had such good relations with Brazil as it does now. Bolsonaro would like to see Brazil becoming a modern North American-inspired power. He wants to get rid of the Brazilian image of a poor Latin American country and to get rid of Brazil's suspicion of the US.