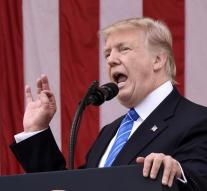 washington - US President Donald Trump pulled hard to Berlin on Tuesday. 'We have a huge trade deficit with the Germans,' he tweeted. 'In addition, they draw too little money for NATO and the armed forces. That's very bad for the US and this is going to change. '

The president recently also visited Germany for a visit to Brussels. 'The Germans are bad, very bad. Look at the millions of cars they bring to the man in the United States. Terrible. That's what we're going to do, 'Trump said, according to Der Spiegel.

German Chancellor Angela Merkel also seemed to take some distance from the US on Sunday. She called on Europe to reflect on her own strength. 'The times we could fully count on others are really over. I've experienced that over the past couple of days, 'Merkel said after the G7 summit in Sicily, which had hardly been achieved by Trump's rough performance.