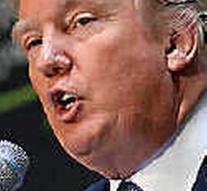 - US presidential candidate Donald Trump does not think there is enough evidence to show pro-Russian separatists in Ukraine blamed for the downing of flight MH17 . Republican responded , according to US media, when asked what he would do as president to call on Russia to account for the disaster.

" They said they were not ", said Trump. " Maybe it was their weapons , but they have not used or fired. They even said that the other party fired to blame them . " According to the Republican there will probably never be an answer to the question of guilt.

Trump later appeared to backtrack, claiming that Russia and pro - Russian fighters " likely " responsible for bringing down the unit. " Only a few people know the facts. And you know one of those people, President Putin can be. We know one thing for sure: it is not about talk ", concluded the presidential candidate.