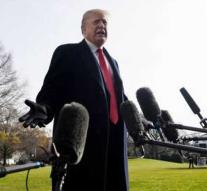 washington - John Kelly, the chief of staff of the White House, is stepping up before the end of the year. According to news agency Bloomberg, President Trump said that, without mentioning the name of a successor.

Kelly's departure was already in the air. Media speculated that he will be replaced by Nick Ayers (36), who now works for Vice President Mike Pence. Those rumors were fed when President Ayers recently asked to join him in the presidential plane Air Force One, even without Vice President Pence being present. In the White House, Ayers is not equally well with everyone: some people find him ungainly and overbearing.