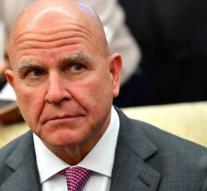 Trump made the change on Thursday night via Twitter. McMaster is thanked after fourteen months for proven services. He will always remain 'a friend', writes Trump.

The Washington Post reported earlier this month that Trump had enough of McMaster. It would be too rigid. Also his briefings would take too long and not be relevant enough.

Earlier Michael Flynn left with less affectionate texts. He had not told Mike Pence the truth about contacts with a Russian ambassador.