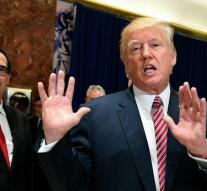 new york - The statements by President Trump on Tuesday that the violence in Charlottesville came from two sides is in the wrong throat with many Americans. Shot. Also in his own party, Trump's reaction to the racist violence, in which a woman came to life, is bad.

Republican Ileana Ros-Lehtinen: 'Both parties responsible for violence? No, 'she tweeted.

The first reaction of Trump to the violence in the city of Virginia also caused a storm to criticize. He then expressed himself in neutral tone about violence, without mentioning the ultra-right protesters.

Monday, under the great political pressure of Democrats and Republicans, Trump still condemned the right extremists. At the press conference in New York on Tuesday, Trump again came back to that response.

Trump showed at the press conference understanding for right-wing protesters who protested Saturday in Charlottesville against removing a statue of General Robert E. Lee. 'Washington and Jefferson also had slaves. Do they have to leave their statues? Is George Washington in turn next week and Thomas Jefferson? What does this mean? '