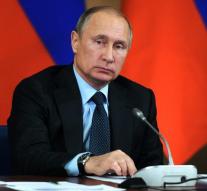 moscow - The elected US president Donald Trump and Russian President Vladimir Putin have spoken by phone each Monday. According to the Kremlin, the two have agreed to enter into a 'constructive cooperation'.

The two leaders by phone keep each other informed and to make an appointment to talk to each other in person.

Trump is sworn in as president and successor Barack Obama on January 20. Obama maintained tense relations with Putin because of a range of issues including the war in Syria and the unrest in Ukraine.