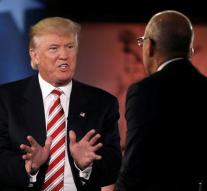 - Republican presidential candidate Donald Trump has during a military forum praised Russian President Vladimir Putin for his leadership. During the forum appeared Trump and the Democratic candidate Hillary Clinton for the first time during the election campaign together for the cameras. Clinton defended her skill and judgment with respect to the e-mail scandal.

Trump said at the forum that the Russian president,, many more have shown a leader than our president has ever been. '

Meanwhile, Clinton came under fire over its handling of secret information through her personal e-mail server. According to an American officer he would have entered the prison as he had done was handled as secret emails as Clinton.,, I've done exactly what I had to do and I always take it very seriously and will always do so, 'Clinton replied.