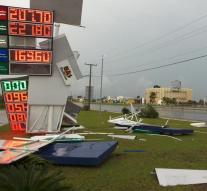 The American island's power grid has been completely destroyed. The airport of the capital of San Juan is nevertheless opened again for military and rescue flights.

Trump said after meeting with the Ukrainian president Petro Poroshenko in New York against the media that he would be visiting Puerto Rico at a suitable time as head of state. He did not mention a date.

As regards Puerto Rico, Trump talked about 'a very, very difficult situation. 'He also said that the US authorities have now taken action to assist in the restoration work.