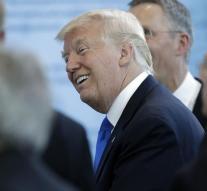 brussels - US President Donald Trump promised Thursday in Brussels to act against leakage of intelligence. He called the forwarding of sensitive information to the press in a statement 'a major threat to our national security.'

The British authorities responded this week when US-led information about the investigation into the attack in Manchester was triggered by US media. Premier Theresa May announced to the US President to address there in Brussels.

Trump asked the Ministry of Justice to launch an investigation into the issue, without referring to British criticism in so many words. As far as the president is concerned, the perpetrator must be treated legally in all possible ways. He emphasized the relationship between the US and Britain very much.

The Republican president has been annoyed by American officials who leak to the press for a long time. The White House announced earlier this year to investigate how the press has gained sensitive information about telephone calls from Trump.