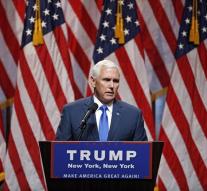 - Donald Trump wants the Republican candidate with the conservative Mike Pence as running mate to battle for the US presidency. Trump presented the Governor of the State of Indiana Saturday,, as its first choice 'for vice-president.

Pence has proven itself according Trump Indiana as someone who can get government budgets in order and to create jobs. Pence also can help win the right wing of the Republican Party for Trump; Pence is against abortion and gay rights.

Monday begins in Cleveland convention of the Republican Party that Trump and Pence must nominate for election on 8 November. Republicans are deeply divided over the Trump win in the primaries. The real estate magnate from New York has established itself as an outsider.