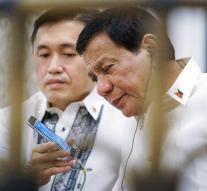 manila - US President Donald Trump complimented his Philippine official Rodrigo Duterte last month with his 'fantastic approach to the drug problem'. This is evidenced by leaked Philippine minutes of the phone call, held by American media.

Trump made the statement in the same conversation in which he invited Duterte for a visit to Washington. The latest revelation is painful, because Duterte is just under fire internationally because of its hard approach to drug criminals. Since its inception, thousands of suspects of drug offenses have been killed.

'I wanted to congratulate you because I hear about the fantastic approach to the drug problem,' said Trump. 'Many countries have that problem. We have a problem. I wanted to call you to say that you are doing well. ''

A senior US official said the government did not question the accuracy of the Minutes. He refused to give a further explanation.