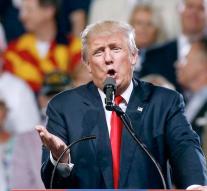 - US presidential candidate Donald Trump has done again pressing statements. This time he emblazoned the former Iraqi dictator Saddam Hussein as a fighter against terrorism.

'He was a crook, a real crook. But you know what? What did he do well? He killed terrorists. He did very well, '' said Trump in a speech in the state of North Carolina.

His remark came to assist him criticism from its own Republican ranks. The leader of the party in the House of Representatives Paul Ryan pointed out that Saddam was one of the most evil men of the 20th century. Democratic presidential candidate Hillary Clinton called Trump's comments,, unabashed praise for brutal dictators. ''