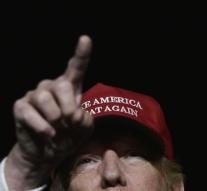 - Donald Trump has a total of $ 66 million of his own funds stopped in his campaign. That is much less than the 100 million he would spend in their own words. This is evident from the financial statements of his campaign, made public Thursday evening.

Companies from the Trump empire, as his private jet and his skyscraper in Manhattan, yet received $ 11 million in payments from the campaign chest.

In total, took the Trump campaign spent $ 339 million and was 322 million dollars. That's still a lot less than the 565 million dollars, according to the Federal Election Commission was issued by the campaign of Hillary Clinton. According to a data analysis company Media quant Trump took out his election victory mainly on presentation of the 5 billion of 'free' television news programs each word millionaire brought the news.