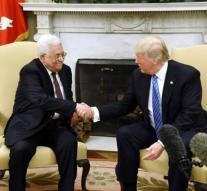 washington - US President Donald Trump believes that the Israelis and Palestinians are prepared to conclude a peace agreement. 'This is something that I honestly think might not be as difficult as people have thought for years,' he said during a visit by Palestinian President Mahmoud Abbas to the White House.

Trump told Abbas that he was determined to work with both sides to conclude an agreement. He did not tell how he plans to get the two camps in line, but was full of optimism. 'We are going to get this together,' the president promised.

Abbas, in turn, said that the Palestinians are ready for a peace agreement that provides two states along the borders of 1967. 'It is time for Israel to end the occupation of our nation and country,' said the leader of the Palestinian Authority.