Home / World / Trump on the way to Italy 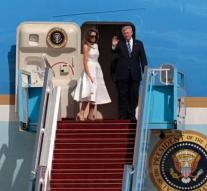 rome - US President Donald Trump has left Israel. The Presidential Air Force One departed Tuesday from Ben-Gurion Airport in Tel Aviv. Trump is expected later in the day in Italy.

The president spoke for about an hour with Palestinian leader Mahmoud Abbas. Trump subsequently wanted to get everything out of the closet to allow for a peace agreement between Israelis and Palestinians.

The president believes there is sufficient support for an agreement. 'I had a conversation with President Abbas this morning and can tell you that the Palestinians are ready to reach peace,' he said during a speech at the Israel Museum.

Also Israeli Prime Minister Benjamin Netanyahu would have assured the president that he wants peace. 'With determination, compromise and the belief that peace is possible, Israelis and Palestinians can make a deal,' concluded Trump.