Home / World / Trump on the coffee at King Filip 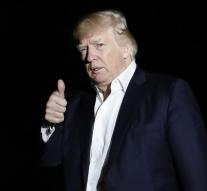 - King Filip of Belgium gets US President Donald Trump on the coffee. Trump will arrive on Thursday, May 25th, Ascension Day, at 10.00. The Flemish broadcaster VRT reports that Prime Minister Charles Michel will be present and also the newly elected French president Emmanuel Macron would attend the audience.

More details about the meeting are not yet known. Thus, according to the VRT, it is still unclear where the meeting will take place. Trump is expected to accompany his wife Melania. Later in the day he visits NATO and the European institutions.

Trump makes his first foreign trip as American president this month. In Saudi Arabia he will meet King Salman. In addition, Trump visits the Vatican and Israel.