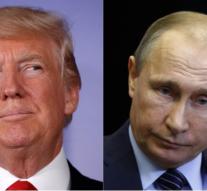 warschau - Shortly before his first meeting with Russian President Putin, President Trump stressed in Warsaw on Thursday that no-one knows exactly who are the Russian hackers.

Circles in US intelligence services have argued that the Kremlin might be behind attempts to influence US presidential elections last year. Trump again showed a lot of skepticism on Thursday, reported US media from the Polish capital.

'Nobody really knows what's happening,' said Trump. 'I think Russia can find out, but people in other countries also manipulate. I do not want to name names, but I think there are a lot of people who mix themselves in business, 'said Trump.

The American president meets his Russian ambassador in Hamburg on Friday.